Your Questions Answered: What Is The Height Of Each Smokestack?

Many classes have emailed to compliment the TS Kennedy’s bold blue and gold smokestacks.  A few mentioned that the smokestack match their school colors.

The class also asked quite a few questions about the smokestacks, including:

What is the height of each smokestack?

What is the diameter of each smokestack?

What is the job of the smokestacks? 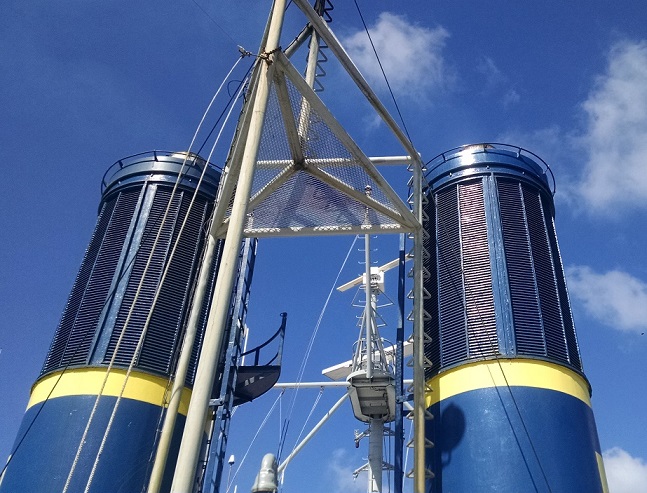 Although the cadets and crew aboard the TS Kennedy refer to them simply as stacks, their proper name is funnels.  Funnels were first introduced in the steamship days, after oceangoing ships made the transition from sail power to coal-fired engines. They were designed as chimneys, used to expel smoke and fumes from the decks below.  To keep the outflow from interfering with the crew and passengers, smoke and fumes were directed towards the sky.

The funnels, or stacks as the cadets and crew call them, measure 12 feet in diameter.  The TS Kennedy’s Chief Engineer estimates that each stack stands 50 feet above the Bridge Deck.

Once each day while the TS Kennedy is at sea, the Engine Room will “blow the tubes” to clear the soot that has built up on the boiler tubes.  If left on the tubes, the soot would act as a blanket, insulating the tube and slowing down the boiling of water needed to make steam.

High pressure steam will be blown across the tubes in a sequential process, taking about 15 minutes per boiler.  The Mate on the Bridge will alter the direction of the ship based on the wind so that the escaping soot is blown to the side of the ship, rather than to the bow or stern.  If the wind does not cooperate, the soot will rain down like black snow.  The ship does not “blow the tubes” in port. 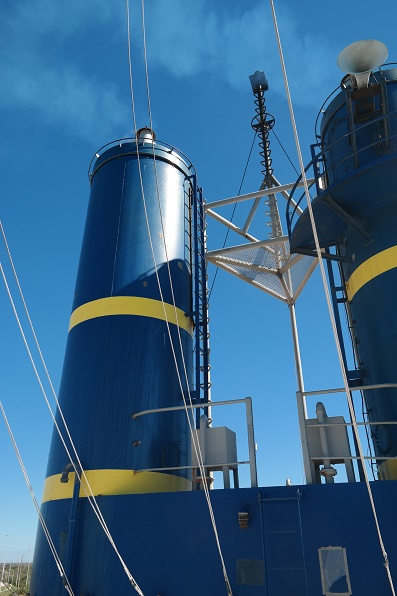 Now that you know the science and mathematics behind the funnels (stacks), let’s look at them as pieces of art.

In the early days of transatlantic cruising and shipping, many people believed that the number of funnels on a ship was related to how fast or powerful it was.   Although this was not true, military ships added additional funnels to show their power.  Commercial ships followed their lead.  Both the RMS Titanic and the RMS Lusitania had false funnels that were designed to project an image of grandeur.

When you see photos of large cruise ships in port, pay special attention to their funnels.  The funnel can help you identify the cruise ship company before you can even read the ship’s name.  For example, if you spot a red funnel shaped like a whale’s tail, you’ll know that the ship is owned by Carnival Cruise Line.  Carnival has trademarked the shape so that no other company can copy them. 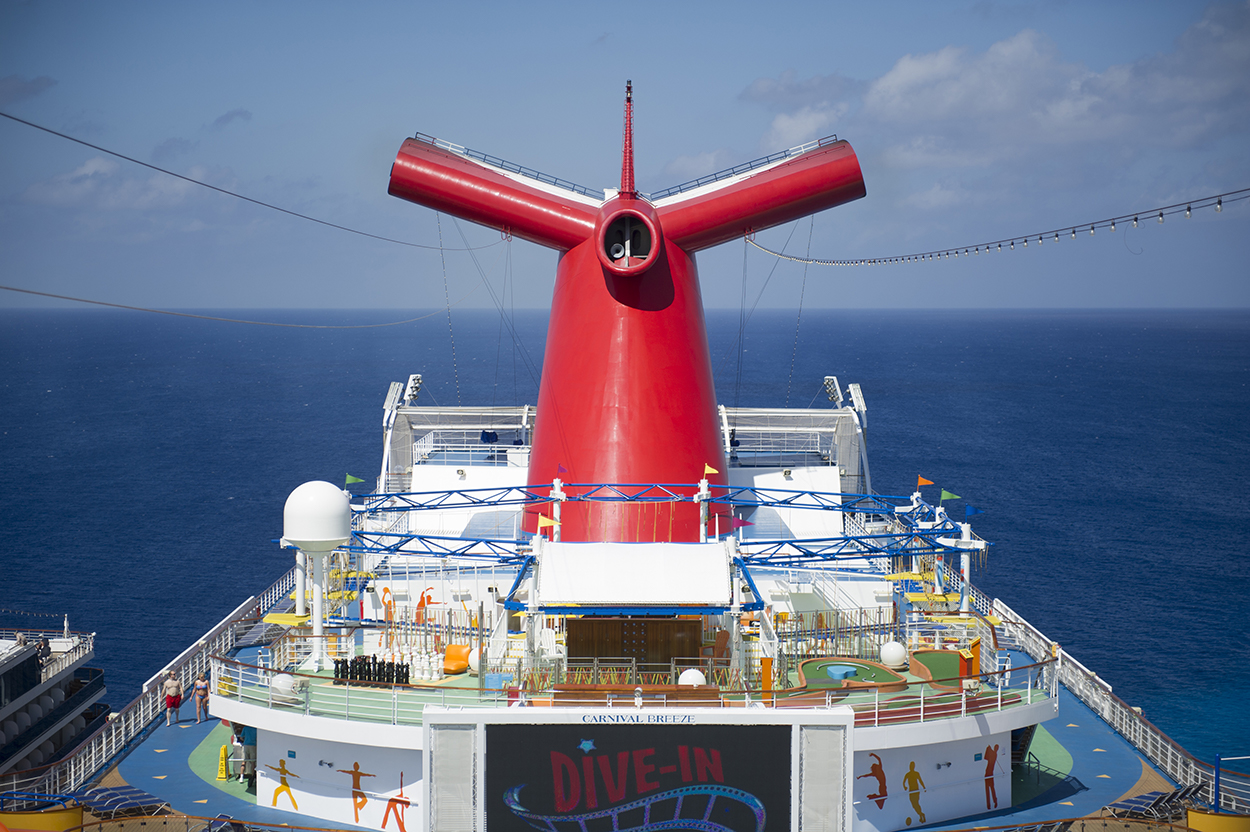 The silhouette of mouse ears on a funnel will let you know that it’s a ship owned by Disney.  Just like the ships of old, Disney ships have one fake funnel.  Instead of enclosing exhaust, the fake funnel aboard the Disney Wish encloses a luxury family suite. 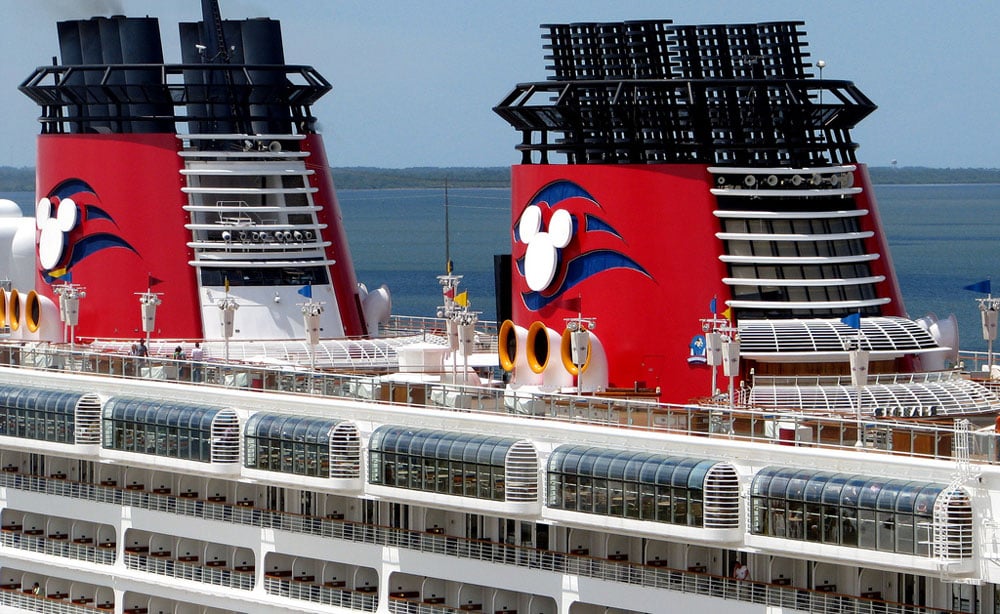 Look at this vintage poster of steamship funnels.  Look at the colors chosen for the funnels.  Which color combination is your favorite? 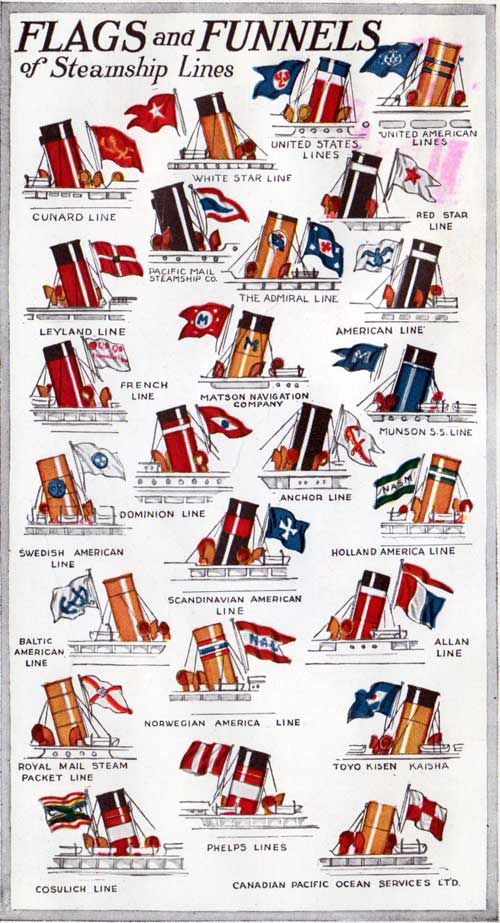 Do you feel like getting creative?  Let’s design new funnels for the TS Kennedy!  Keep the official Academy colors of blue and gold.  The rest is up to you!

We’d love to see your finished masterpieces.  Although Captain Campbell will certainly NOT authorize the repainting of the stacks, he and the cadets would enjoy seeing what you created.

Photos may be emailed to: ftvsubmissions@maritime.edu.

Click on the link below to view the activity, Art: Creating New Funnels For The TS Kennedy to get inspired.