Welcome to the first meeting of my Buccaneer Book Club!  Today, I have chosen Sammy The Seasick Pirate by Janelle Springer-Willms.  The book was illustrated by Damien Jones.

Do you know what it means to be seasick?  When the ocean gets rough, a ship begins to rock back and forth, up and down.  Your brain gets confused by the messages that it is receiving from your eyes, ears, and the rest of your body.  Some messages tell your brain that you’re sitting quietly in a chair reading a book.  But other messages might indicate that you’re jumping up and down at exactly the same time.  When your brain gets confusing messages, you may begin to sweat, feel tired, and experience dizziness.  Your stomach may feel queasy.

In Sammy The Seasick Pirate, a young boy is determined to become a pirate just like his papa.  Sadly, there is just one thing that he isn't able to do.

I chose Sammy The Seasick Pirate as my first Buccaneer Book Club selection for two reasons.

Some cadets on their first Sea Term have a hard time adjusting to the rocking of the ship.  While you are reading about Sammy, a few cadets aboard the TS Kennedy may be feeling seasick.

The book’s author, Janelle Springer-Willms, was born and raised on the island of Barbados.  The TS Kennedy will dock in Barbados on Friday, January 20th.

Here are five of new vocabulary words that you’ll hear in Sammy The Seasick Pirate.

1. hoist: to raise a flag to its highest point 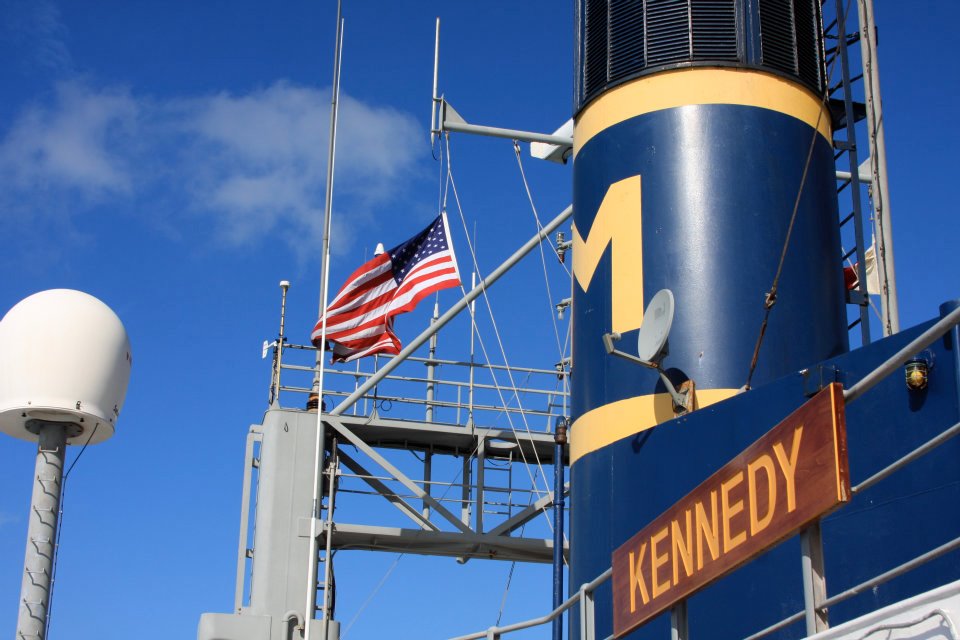 2. horizon: the point where the sea and the sky appear to meet

Cadets on the Bridge of the TS Kennedy and out on deck, look at the horizon for approaching ships.

Pretend you are holding a pair of binoculars.  Look to the right and to the left.  Pretend that you are checking the horizon for approaching ships.

3. swab the deck: to mop or clean the floor

For many years, all ships were made of wood.   Sailors would swab the deck to keep mold and moss from growing over the wooden deck.  The water made the planks swell and grow closer together.  This prevented water from storms and waves from dripping down to the decks below.

Cadets aboard the TS Kennedy take turns keeping all the decks (floors) of the ship clean.

Pretend that you are swabbing the deck of the TS Kennedy with a mop or a broom.

4. pier: a raised narrow structure that rises above a body of water, usually extending from the shore, supported by piles or pillars

When the TS Kennedy visits the busy port of Bridgetown, Barbados, she will tie up at a pier with other large ships.  The cadets will walk down the pier to reach the island. 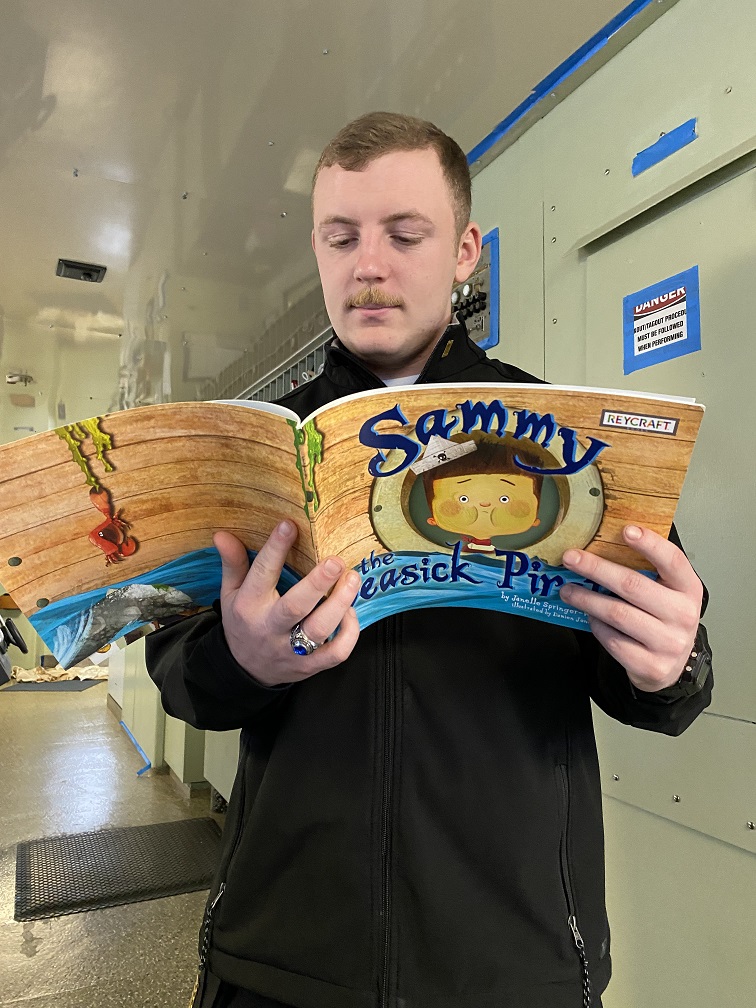 1/C Safety Rate, John Downey from Falmouth, Maine took a break from watch on the Quarterdeck to read Sammy The Seasick Pirate.  Cadet Downey admitted that he became seasick on his first Sea Term in 2020.  He understands what some of the younger cadets are going through.  He takes time to remind them that their seasickness won’t last for long. 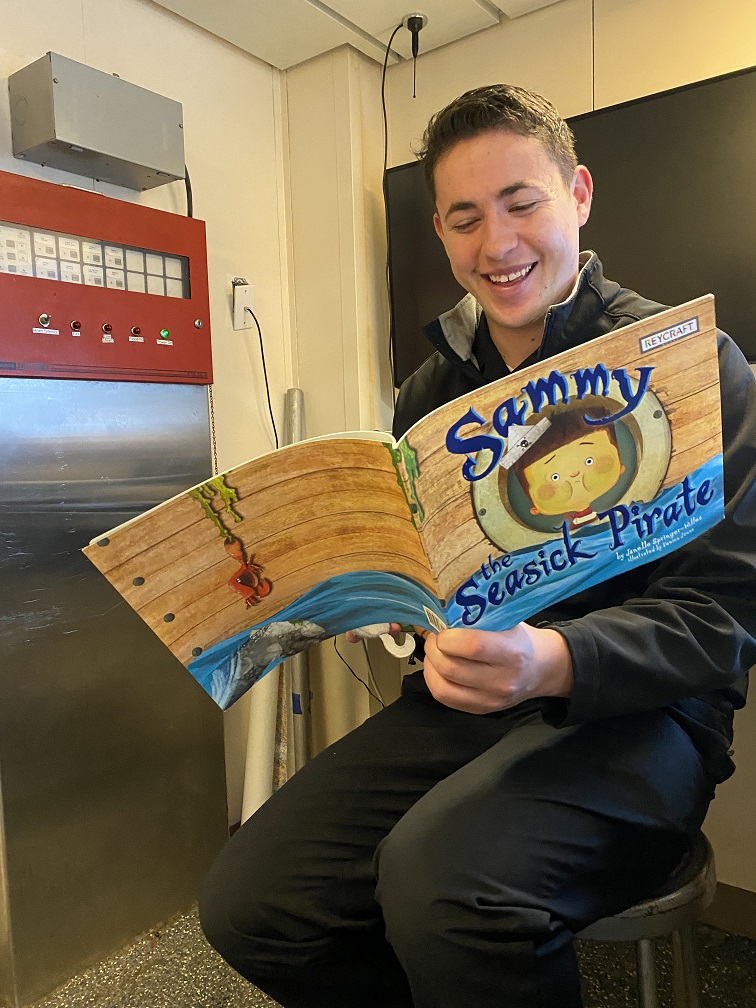 Are you ready to hear Sammy The Seasick Pirate by Janelle Springer-Willms?  Click on the video below.

Well, what did you think of Sammy’s idea to become a land pirate?

When author Janelle Springer-Willms was growing up on the island of Barbados, she heard stories of a land pirate called Sam Hall Lord.  The legend described Lord hanging lanterns in the coconut trees on the beach by his castle home.  Unsuspecting captains of ships would mistake the lanterns for lights from the port of Bridgetown, Barbados.  As the captains sailed their ships towards the beach, they would hit a reef.  Pirate Sam Lord would loot the ships of their valuables.  This legend told to Janelle was her inspiration for Sammy The Seasick Pirate.

On Thursday, we’ll read the book, Shiver Me Letters: A Pirate ABC written by June Sobel and illustrated by Henry Cole.  You’ll love it! 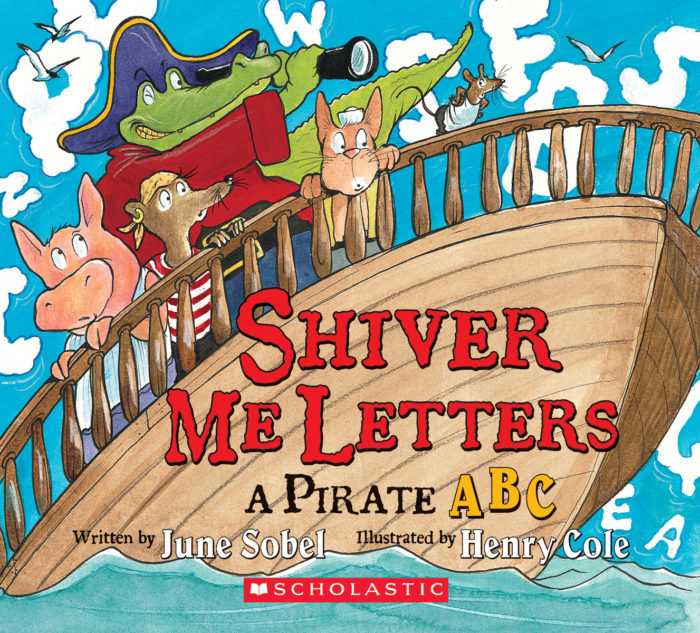