literal meaning: It is raining very hard.
figurative meaning: Cats and dogs are falling from the sky.

I have discovered some nautical idioms that you may find interesting.

all hands on deck:
One nautical idiom that I hear often aboard the TS Kennedy is all hands on deck.  Usually it is shortened to all hands.  It’s funny to think about lots of hands running around on the deck of the ship, isn’t it?  That would be the figurative meaning of the idiom.  The literal meaning of all hands is everyone.   When cadets hear all hands they know that everyone’s help is needed for something important.  Last week, Captain Campbell wanted to remind all of the cadets and crew members aboard the TS Kennedy that they needed to watch a short training video in the Computer Lab and complete an assessment before the ship departed.  When he posted a reminder in the Plan Of The Day, it began, “ALL HANDS are expected to complete…”

If your teacher wanted everyone in the class to help clean the classroom or search for a missing book, she could use the idiom, all hands or all hands on deck. 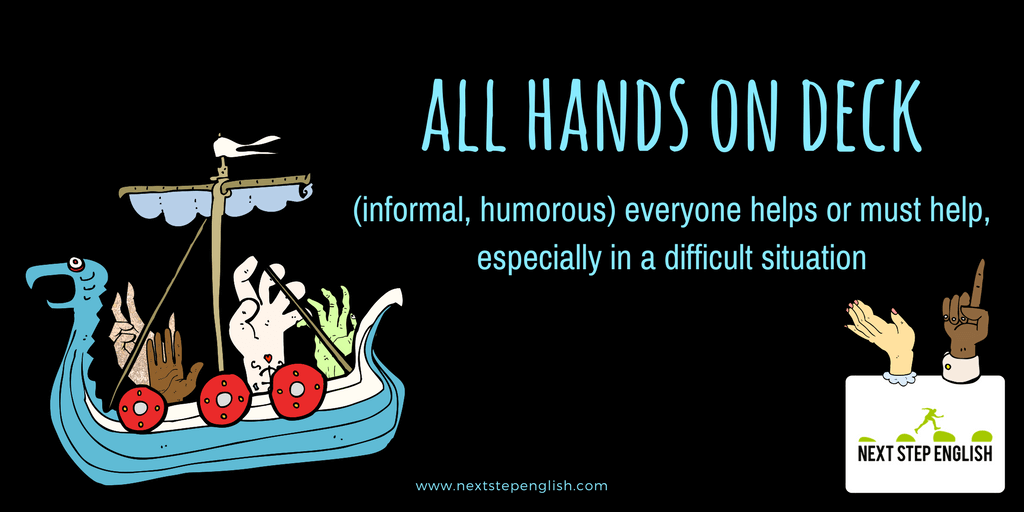 at the helm:
You have already seen several photos of the helm of the TS Kennedy.  The helm is where the Captain or the cadets steer the ship.  If Captain Campbell says, “A 1/C cadet is at the helm.”, we know that he means that the cadet is steering the ship.  That is the literal meaning of the idiom.  At the helm can also mean to oversee an organization or a project.  You could say that your teacher is at the helm of your classroom.  He or she is not really steering a ship, instead he or she is steering your class in the right direction.  That is the figurative meaning of the idiom. 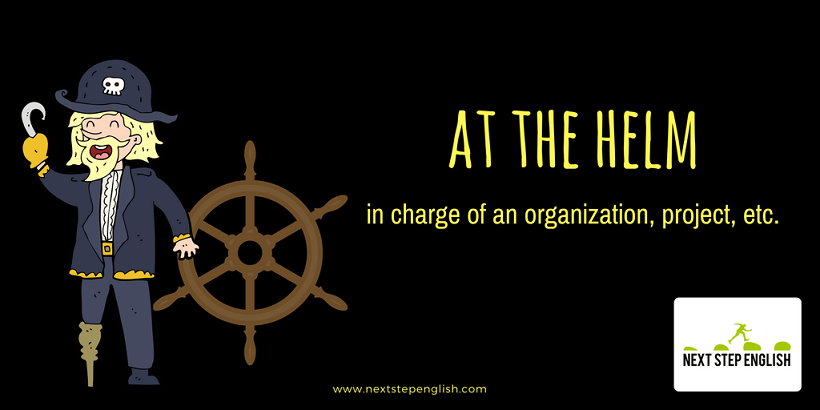 abandon ship:
Last week, you saw photos and read descriptions of the abandon ship drills that took place aboard the TS Kennedy.  Cadets practiced mustering at their lifeboat so that they would know how to respond in the event of an actual emergency.  Leaving a ship in a lifeboat is the literal meaning of abandon ship.  Abandon ship can also mean to leave a failing business, task, or situation. If the workers at a restaurant begin to quit because the owner is making bad decisions, you might say that they have decided to abandon ship.  That would be the figurative meaning of the idiom.  Of course, the waiters and waitresses wouldn’t actually get into lifeboats.  They would simply leave that restaurant and begin searching for a new job. 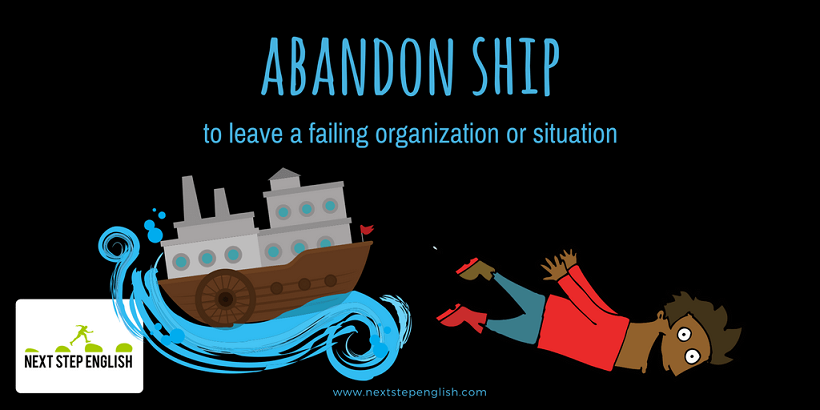 It is interesting to see that these nautical idioms have become part of our day-to-day language, isn’t it?   Try incorporating these three idioms into your conversations at home and at school.  If you decide to illustrate the idioms, please ask your parent or teacher to email me a photo of your work.  ftvsubmissions@maritime.edu

Your favorite pirate aboard the TS Kennedy,
Little Buc