The campus of Massachusetts Maritime Academy has expanded, training ships have come and gone, and the length of Sea Term has been shortened.   There’s one thing, however, that hasn’t changed.

That’s the excitement of Departure Day!

Before the TS Kennedy departs for Sea Term 2023 tomorrow, step into our time machine!

Watch for this time machine feature on weekends throughout Sea Term 2023. 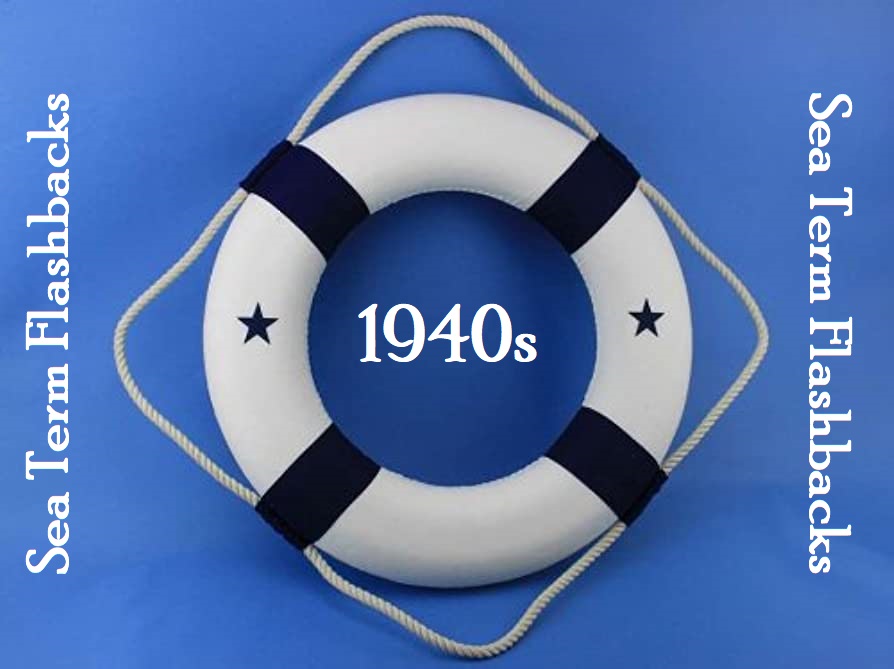 Sea Term 1946
“On March 1. 1946, the Battalion Midshipmen boarded the USMSTS American Mariner at Buzzards Bay and set sail for Charleston, South Carolina on the first leg of the 13,000 mile Caribbean cruise. 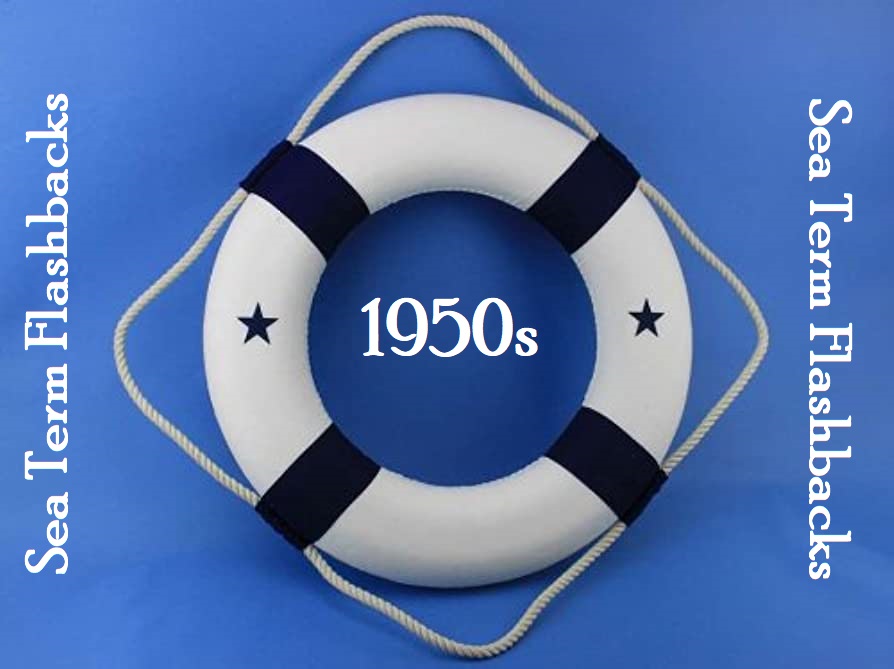 Sea Term 1952
“One day the Charleston no longer touched shore;
This was the day I’d been waiting for!
Soon we’d touch the tip of foreign strands;
I’d taste the fruits of forbidden lands!”

Sea Term 1953
“On a bleak, cold February 5th, the Chun pulled away from the fuel pier in South Boston and pointed her sleek bow for Europe.  Yes, we were scheduled to visit the land across the pond on a cruise that promised to be rich with knowledge and humor.”

“To most of us, the Third Class Cruise was perhaps the biggest event of our young career.  We were actually going to sea on a ship for three months.  Our first night at sea, we weren’t feeling so rugged, however, as wind and wave combined to lay the Charleston on her beams end.  A day out of Buzzards Bay and already the weather was trying to tear us apart.  We somehow managed to persevere, and soon we were steaming in calmer seas.”

“On the twentieth day of January, and after a two week delay, the newly re-commissioned USTS Bay State deftly put to sea on a snowy Tuesday.  The people of Buzzards Bay were on hand to give us a rousing send off, and it was perhaps the first time the people of our home city were really appreciated.”

“In all organizations there should be no flaws, but somehow a fly got into the ointment at MMA in January of 1958.  The shiny new ship wasn’t quite prepared for sea, mechanically or otherwise.  The “otherwise” part was solved by “hiring: a few young men who were willing to carry stores aboard all through the night.

Then, on the morning of January 20, families and friends came down to the Point to wish the new luxury liner, Bay State, bon voyage as she started on her maiden cruise.”

“The day dawned bright in Boston on Wednesday, January 28, 1959.  It was crisp and cold, but all in all, a beautiful day to bid this fair city farewell.  By eight o’clock, all lines had been taken in, and the USTS Bay State slid gracefully away from the fueling pier in East Boston.  We felt a slight nostalgic twinge as we steamed majestically out of the harbor for we were leaving out loved ones behind.  Our nostalgia was forgotten as we prepared to face the perils of our first night at sea.”

“On a chilly morning in January, our Second Class Cruise began.  It was a somewhat different departure from that which we had experienced the year before; for there were no crowds of well-wishes on the pier and this was a lonely refueling pier in Boston Harbor and not Buzzards Bay, and we were leaving, not for Europe as we had hoped, but for the Pacific Northwest.” 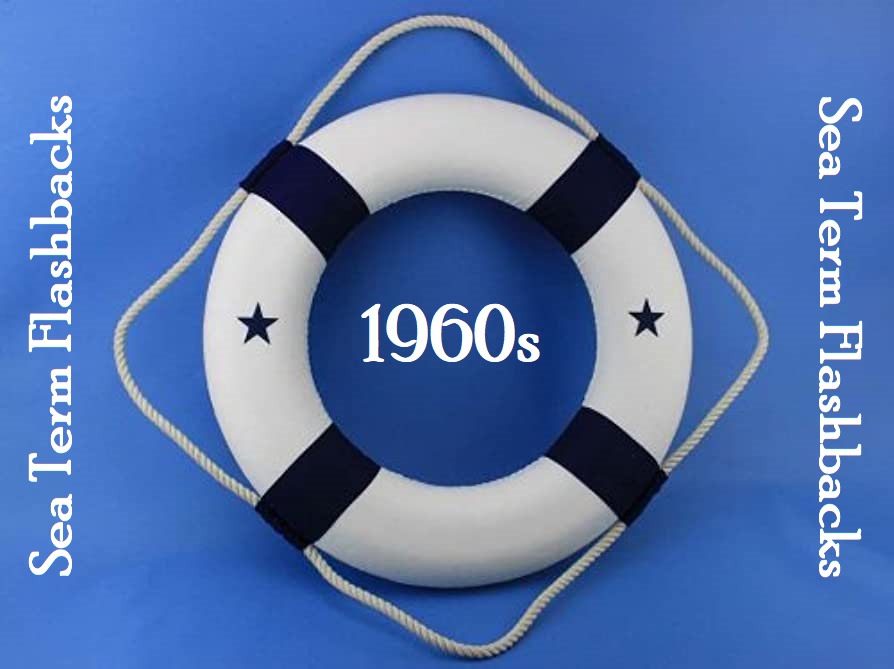 “On the 14th of March, the Bay State once again left the Bay (after a slight delay) for her 1960 cruise to the Mediterranean.  The list of ports were: Hamilton, Bermuda; Funchal, Madeira; Palma De Mallorca; Naples, Italy; Valencia, Spain; Las Palmas, Gran Canaria; Miami, Florida; and the Bay.

“On one typical Cape Cod winter morning, we finally made preparations for our 1961 training cruise.  We let go our lines and got under way, or did we?  For a while it looked like our cruise was going to be on the other side of the Cape Cod Canal, but we finally got our signals straight and headed out to sea to visit some new and mysterious places.”

“The Bay State got underway a little later than had been scheduled and left Buzzards bay full of on-looking kin and sweethearts.”

“The morning of January 7, 1963 dawned bright and clear, but the clouds were congregating in the western sky as if in anticipation of the Bay State’s departure into the cold Atlantic.  The ship was tied in the canal, as an endless stream of white cakes of ice were borne swiftly past by the current.  By 11 o’clock, a large crowd of relatives in well-wishers had gathered to bid the midshipmen farewell on this, our second cruise.

At 1300, with all our fingers crossed, the Bay State was underway.  Fifteen minutes after leaving the pier, we were fogbound.  For the next three days the ship pitched and the third class heaved as memories of the previous cruise returned vividly.  Seasickness is not in the mind, as the new squids will gladly testify.  It is most often found in the stomach.”

“There were sly grins on our faces of all of the middies as chunks of ice floated by.  We hoped that would be the last time we’d see any ice for a long time to come.”

“On a typical fog shrouded January morning in Buzzards Bay, for the first time in many months, the first class arose at 0600, for this was to be the day that we had all so anxiously awaited for 2 ½  long years – the beginning of our upper-job cruise.”

“In all organizations there should be no flaws but as usual in ours there was one, for not even the frantic attempts of the local townspeople to ward off the fog and hasten our departure were of any use, and to our displeasure our sailing was delayed until much later in the afternoon.”

“Departure was scheduled for 1000, and by 1130 the Bay State was to be found still made fast to the faceof the pier in the midst of a fog bound boat drill.  Several short hours later the lines were cast off and we bravely put to sea anxiously looking forward to the days to come.  We young men had to grow our sea legs, which was hard for some and easier for others.  Our found us stumbling and “tooling” as we endeavored to meet both the demands of the sea and the “older men”.

“At long last the cruise started and at long last we were sailing as upper-jobs.  This was gone to be the best cruise yet as it was our last one.  The second day out, the weather turned warm and the sea turned limpid blue, for we had entered the Gulf Stream.”