Meet 3/C Lucas Marcolini, a Marine Engineering major from Marion, Massachusetts!  The town was originally called Sippican when it was settled in1679, named after a local Wampanoag tribe.  Over the years, it was home to sea captains, sailors, and boat builders.  In 1852, Sippican was renamed Marion.

When asked how her son developed a love of the ocean and boating, Lucas’s proud mom explained, “Although we live in a seaside town, it was not a love of boating or the ocean that started Lucas on a path to Massachusetts Maritime Academy.  It was a true love of ships, particularly military battleships, which have faithfully served our country.  His passion started in our own backyard during a visit to the USS Massachusetts.” 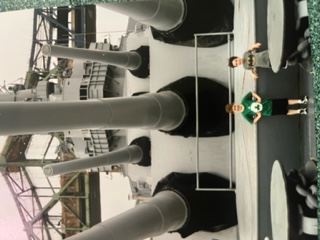 She went on to say, “Lucas was an engineering student at Upper Cape Technical High School, but the traditional college programs consistently did not spark his interest. It was not until we toured MMA and learned about the Marine Engineering program that Lucas found his path.”

Lucas decided, “I want to work on ships.”

Lucas’s high school principal, Joshua Greeley, is the proud parent of a 3/C cadet.  Mr. Greeley took the time to get to know Lucas and to talk with him about his college interests. He suggested Lucas explore MMA as an addition to the traditional college programs he was being guided towards.

Lucas’s mom said, “We will forever be grateful for Mr. Greeley for seeing the potential in Lucas to be the cadet he has become.”

Lucas is sending tropical island breezes back to Mr. Greeley and everyone following his Sea Term at Upper Cape Regional Technical School.  He also sends some Caribbean sunshine to the students following from Bishop Connelly High School in Fall River, home of the USS Massachusetts.  Lucas also sends a warm welcome to all of the students that share his fascination with, and his respect for, military ships.

Growing up, Lucas developed a love of military ships.  Check out this video to learn about the different types of ships operated by the U.S. Navy.

Lucas's love of battleships was sparked by a visit to the USS Massachusetts at Battleship Cove in Fall River, Massachusetts.  This 15-minute will introduce you to this Naval legend.