Safety First: What Happened On The Bridge During The Fire & Boat Drill On 1-5-23

You have participated in fire drills at your schools. Your administrators and teachers have led these drills many times and have developed a safe, efficient routine for all students to follow.  After a few practices everyone knows just what to do.

This week, cadets and crew members participated in three practice drills to prepare for the final drill Friday morning under the watchful eye of United States Coast Guard officials.

Here is what was happening on the Bridge of the TS Kennedy during Thursday's Fire & Boat Drill at 1600.

It all begins with the General Alarm button.

3/C Troy Bockman, a Marine Transportation major from Groveland, Massachusetts had the responsibility of pressing the General Alarm.  The high pitch, ear-piercing sound that he set off is intentionally annoying and unsettling.  It is meant to grab the attention of everyone on the ship, even those sleeping in their rack or wearing hearing protection while working with noisy equipment. 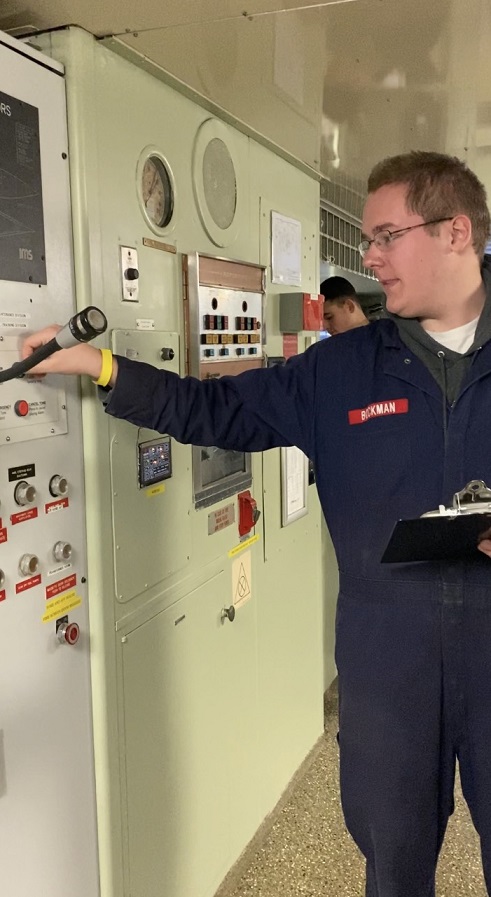 While the alarm was screeching, Captain Campbell turned the crank to the ship's whistle.  It is surprising that the deep, vibrating  sound is triggered by such a small crank.  The crank is down low, at a point where it will not be accidentally hit.  From its appearance, I assume that it is original to the ship. 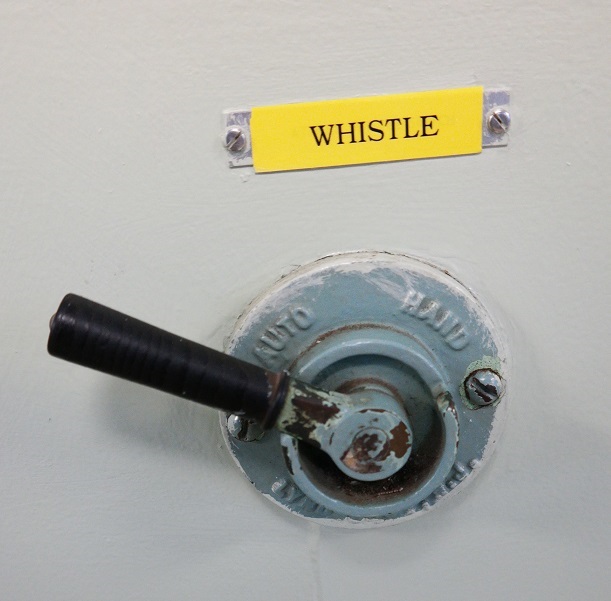 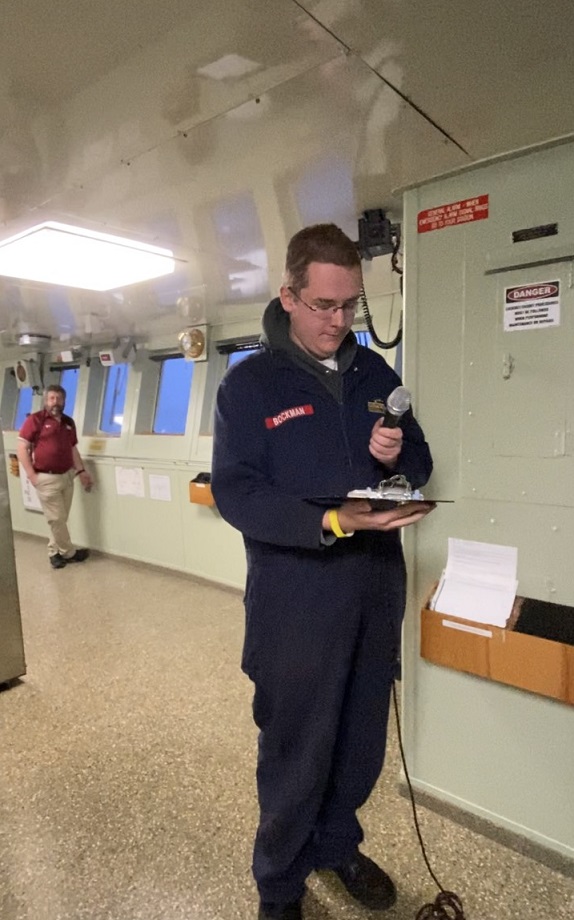 As soon as the signal for the fire alarm stopped, Cadet Bockman made an announcement.  It began, "Fire...Fire...Fire!"  His voice was clear and calm.  He identified the specific location of the fire and instructed cadets to muster at their lifeboat station.

Record keeping is important.  Captain Campbell listed the full name of everyone present on the Bridge.  If this was an actual emergency, these records would be part of the incident investigation. 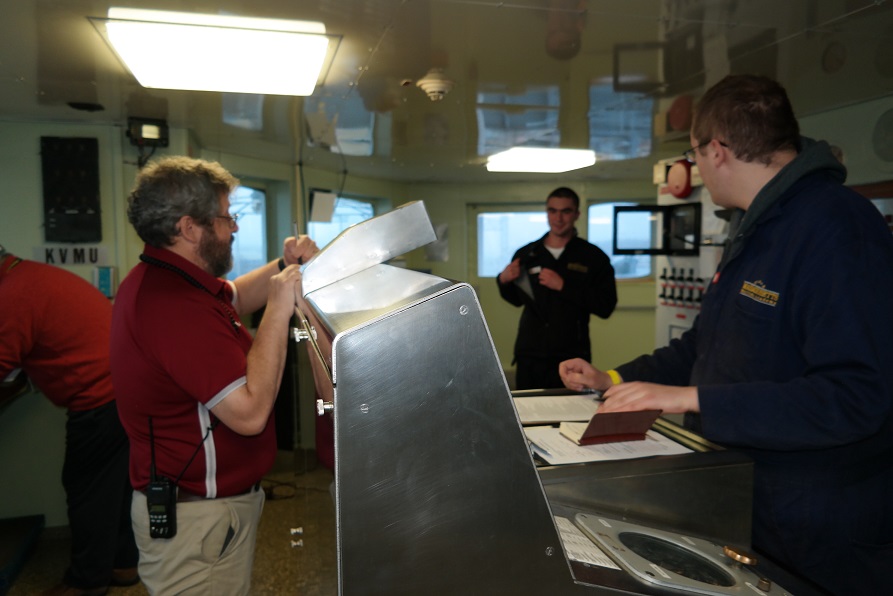 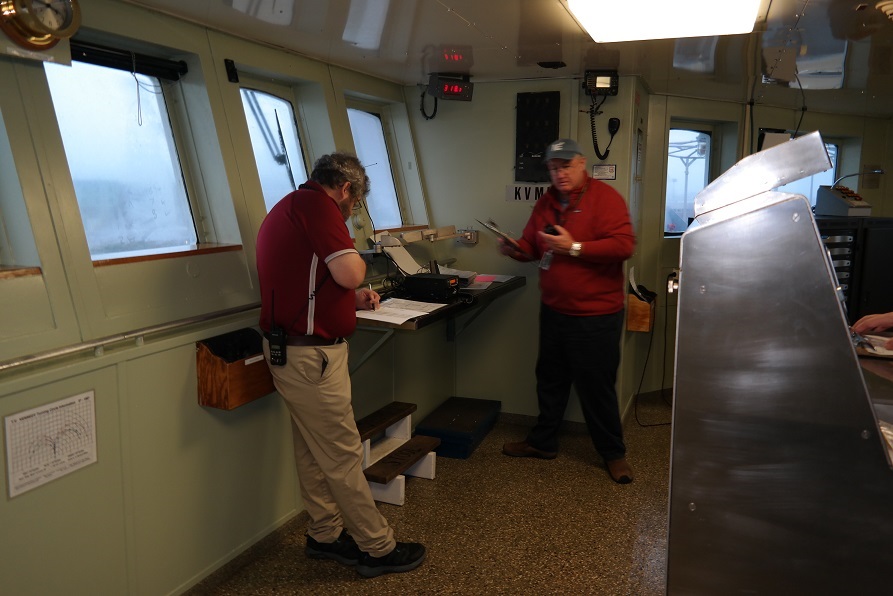 Following the successful Fire Drill, it was time for the Abandon Ship Drill.   Again, the General Alarm and the ship's whistle were sounded.  Cadet Bockman made an announcement.  This time, he began with, "Abandon ship...Abandon Ship...Abandon Ship!"  His announcement included the location of the nearest point of land which was Taylors Point.

Captain Campbell had a unique was of keeping a record as each lifeboat radioed in to say that they  had accounted for each cadet and crew member at that station.  He used the Bridge window as a whiteboard and listed the numbers from 1-8.  As each notice of accountability was received,  he repeated the message aloud and checked the corresponding number off his list. 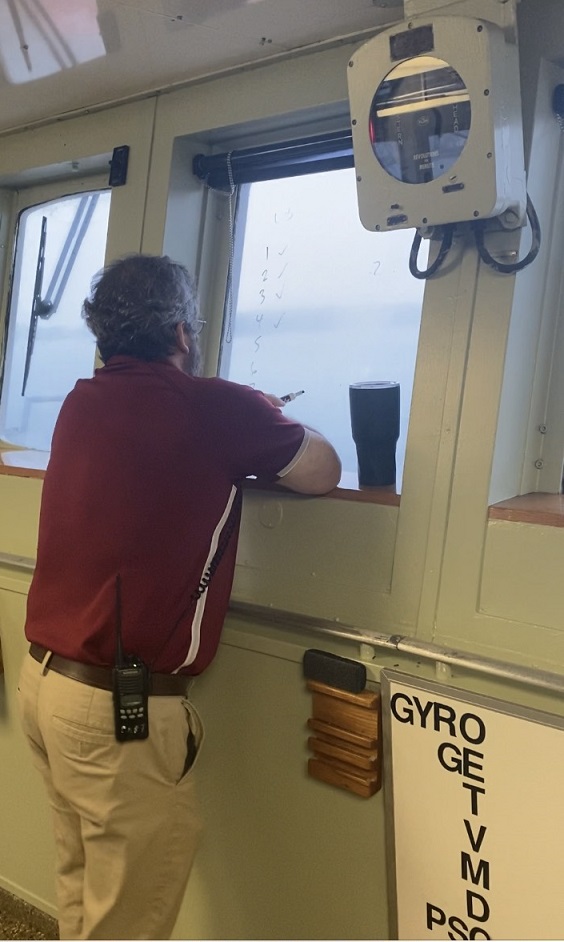 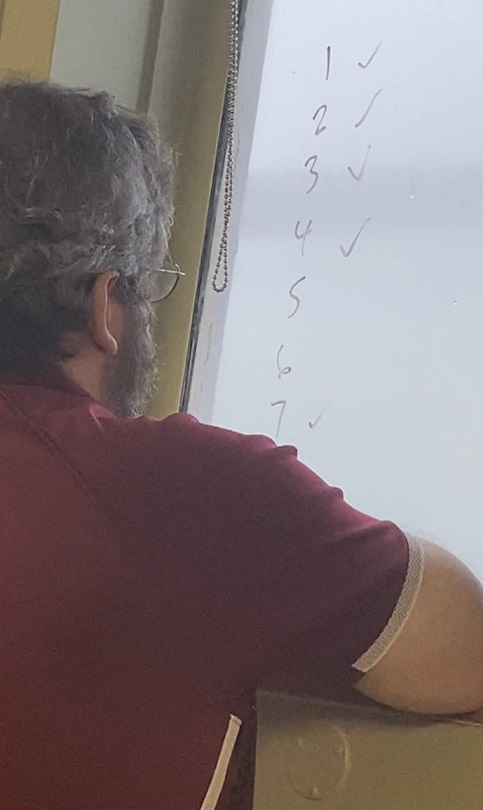 One difference with this drill was that one representative from each lifeboat station had to come up to the Bridge to pick up a Search & Rescue Transponder.  The SART would allow a lifeboat to send and receive radio signals while waiting to be rescued.  Since this was a drill, the cadets received a tag and lanyard to take back to the lifeboat, not the actual expensive piece of equipment.

Cadets who entered the Bridge wearing their lifejackets were reminded that, for safety reasons, lifejackets cannot be worn inside the ship.  The lifejacket could get caught or make passing through tight spaces difficult. 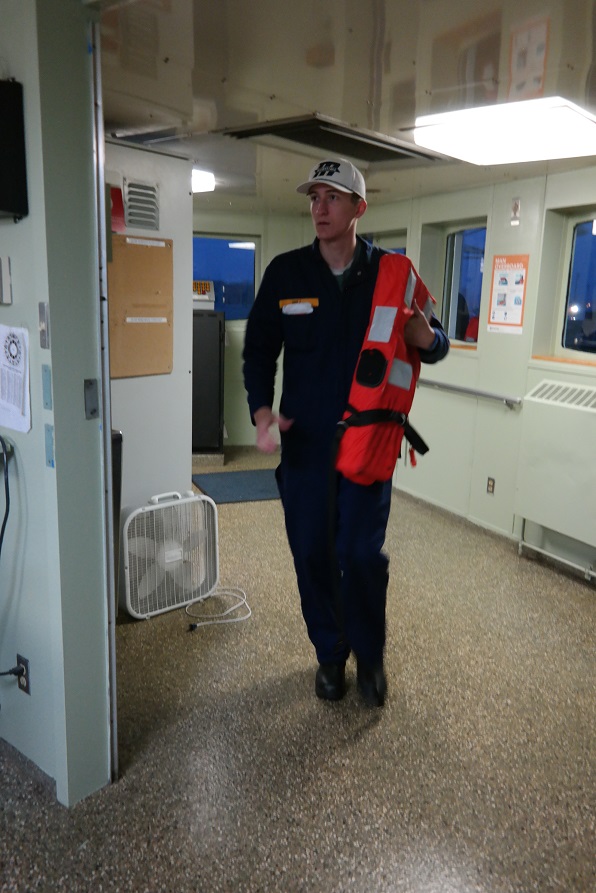 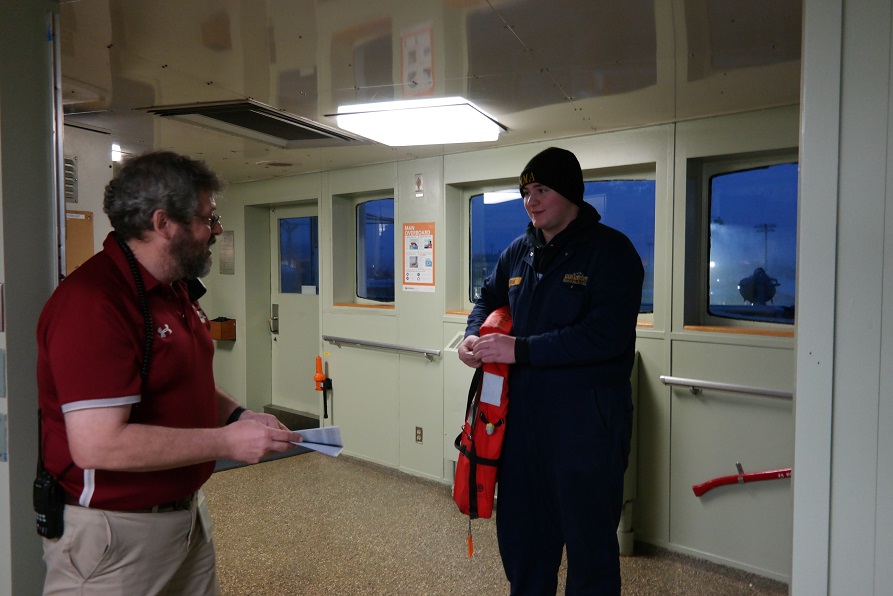 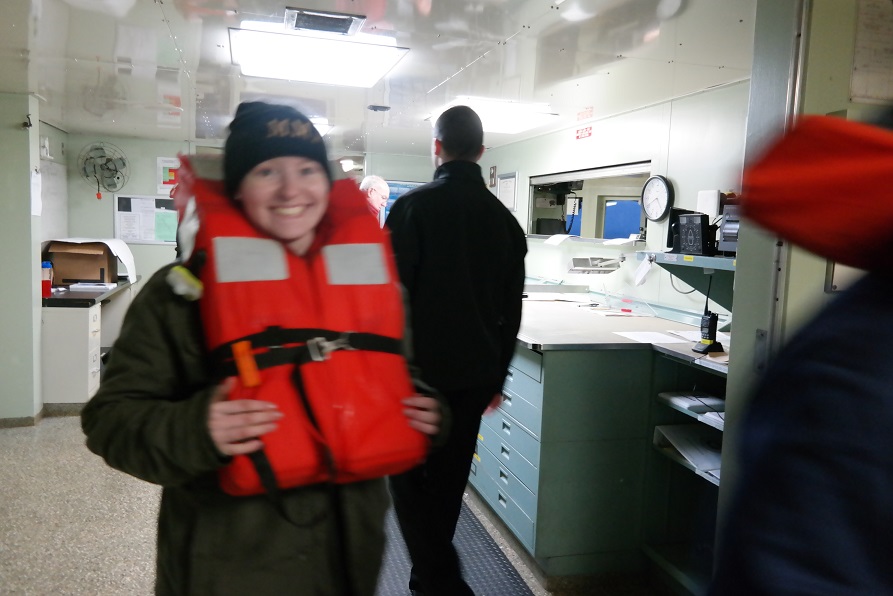 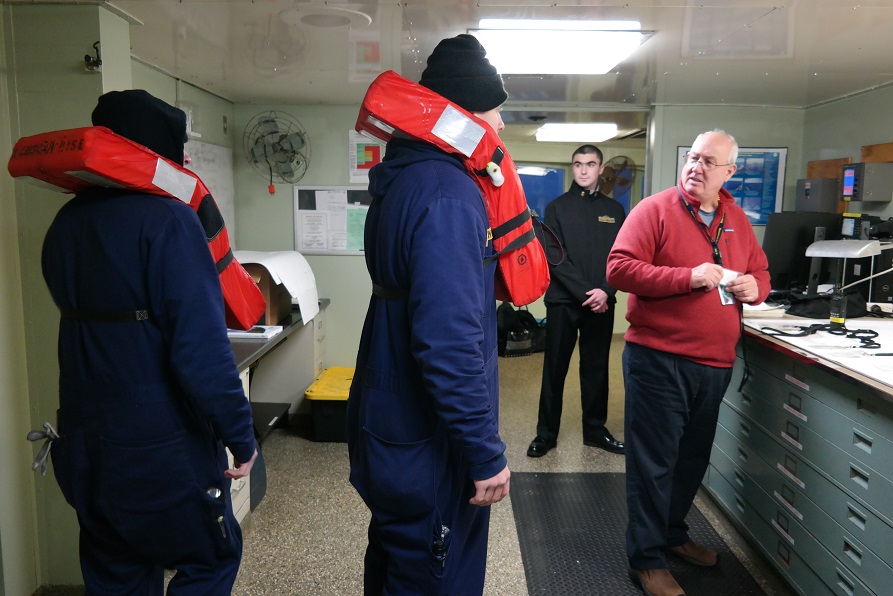 Meanwhile, outside, cadets were gathered in the cold, Cape Cod drizzle.  They didn't complain.  Everyone understood the importance of the drill and knew that they were fortunate that they didn't need to actually abandon ship. 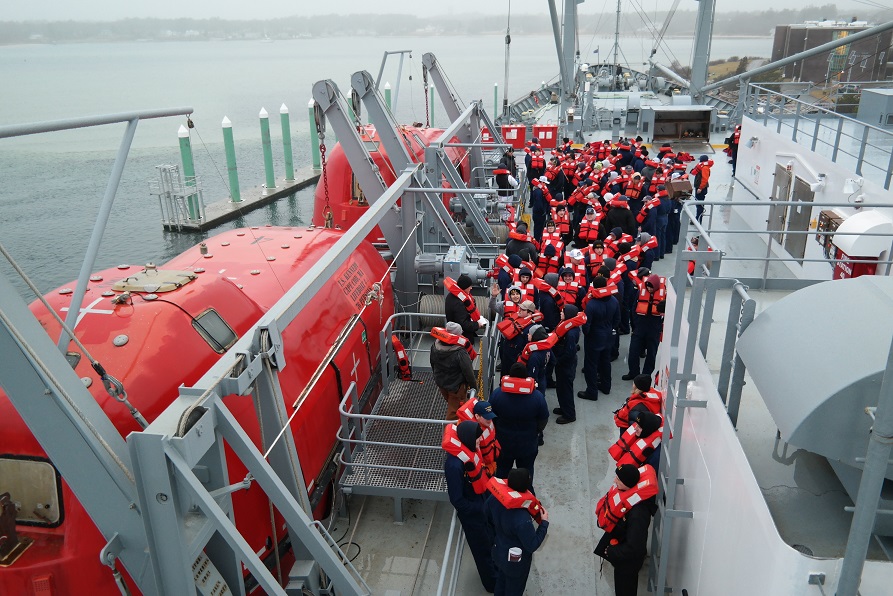 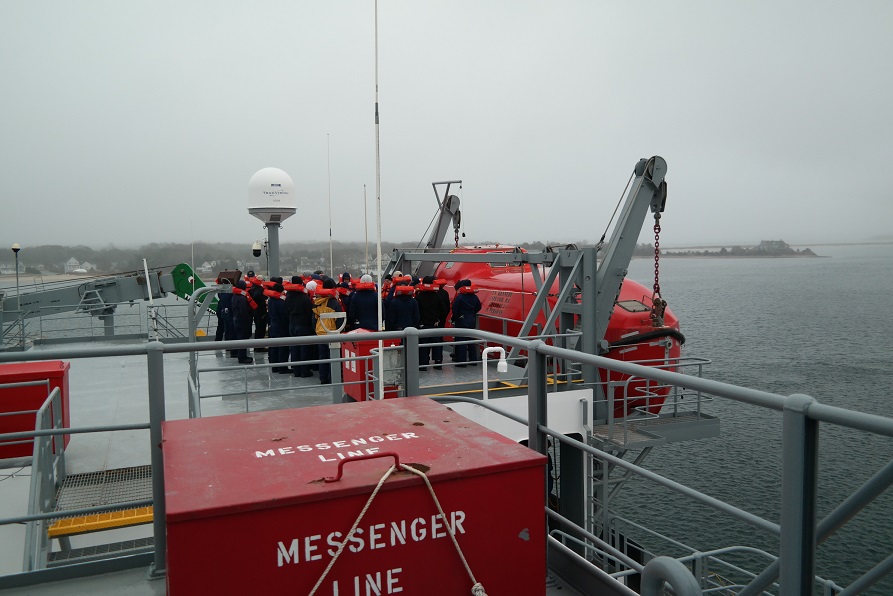 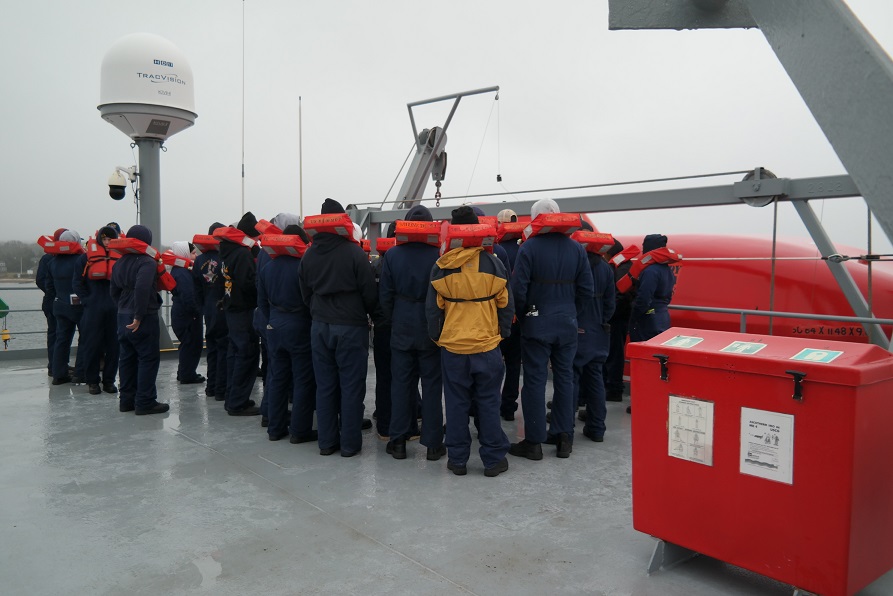 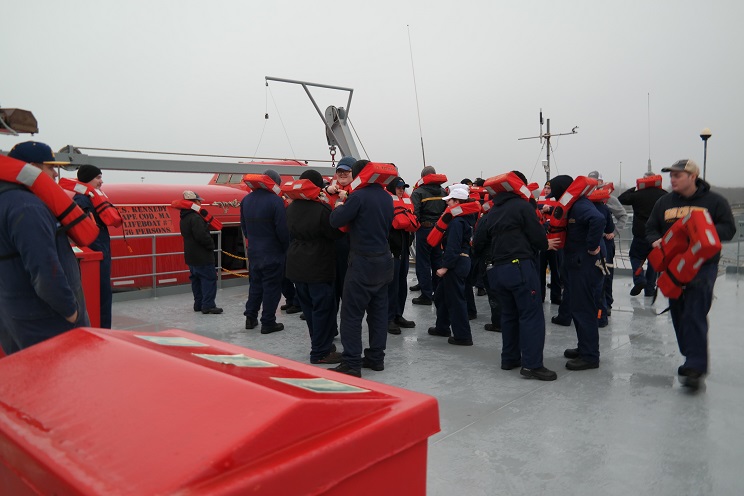 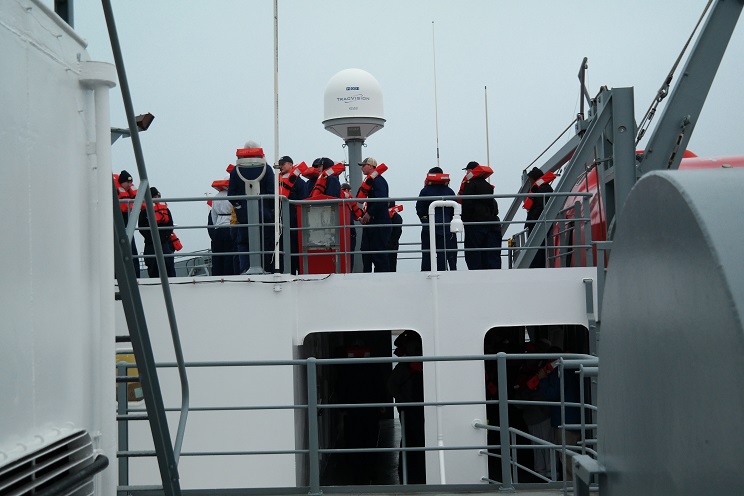 When the signal was given that the drill was over, all that was left to do was for select cadets to return their SART tags.  This time, there were smiles on the cadet's faces.  A sense of pride radiated from them as they arrived on the Bridge.  Although it was only the fourth day of Sea Term, the cadets had already learned so much about being a mariner. 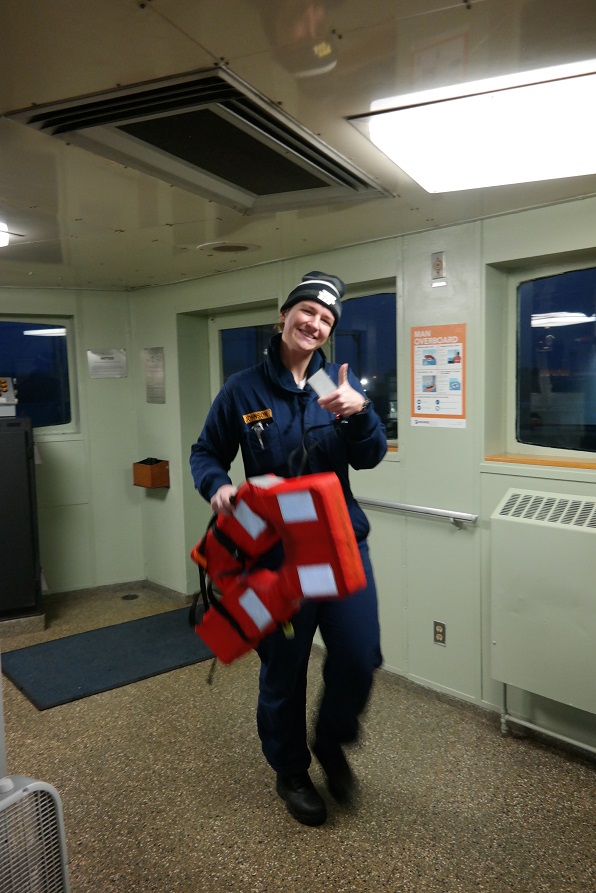 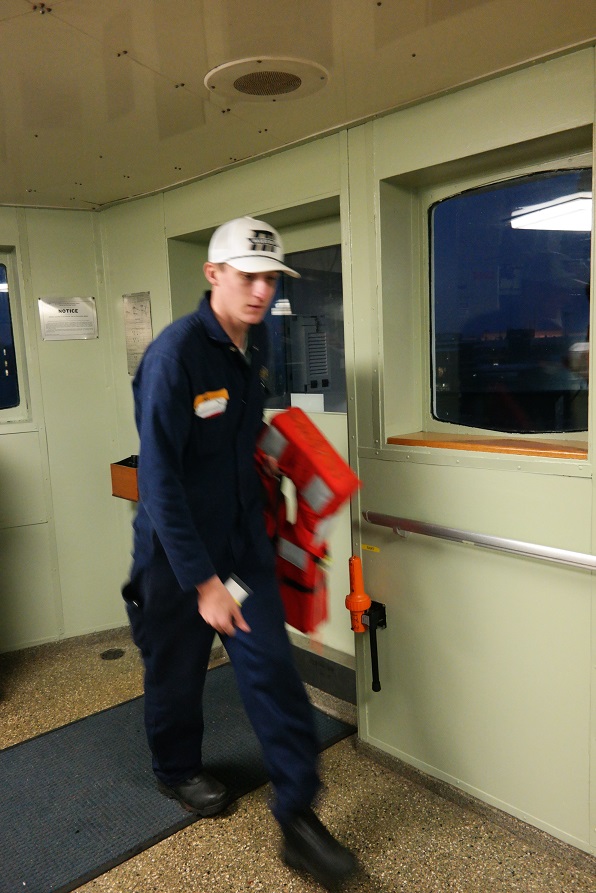 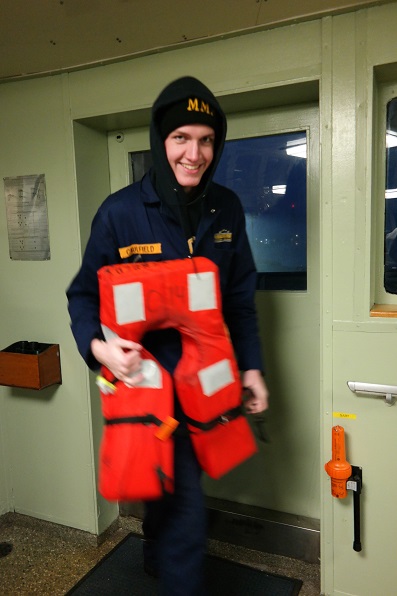 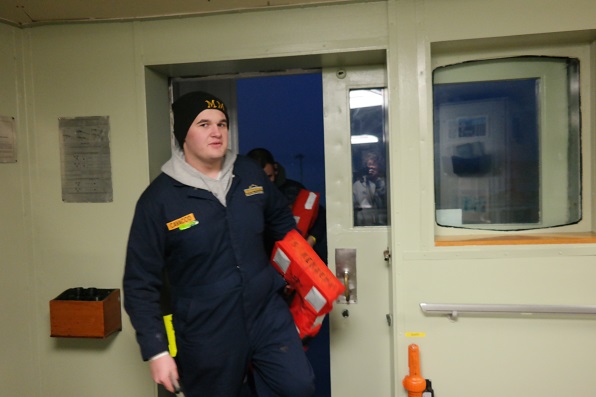 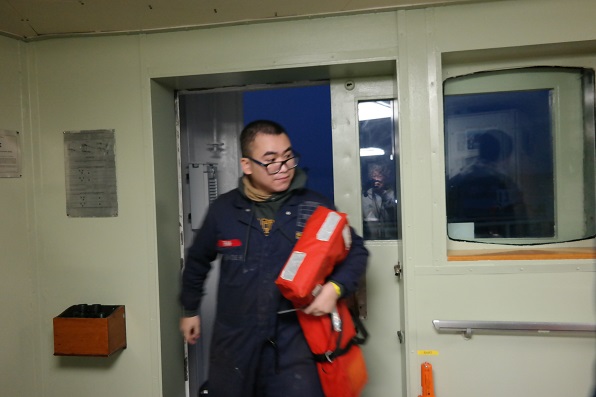 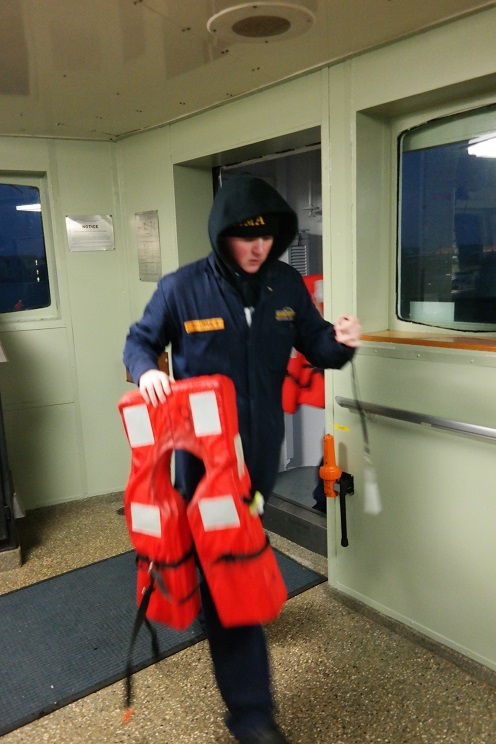 Here is a link to a quick video clip of cadets and crew members at their lifeboat stations.