Do you have two friends with the same first name? How do you distinguish between the two of them when you are talking about them?  Perhaps you use their last name or mention something about where they live or what they like to do.

Sometimes vessels share the same name.  In times of emergency, that could present a big problem.  Also, sometimes vessels have complicated names that may be difficult to pronounce during radio communication.  As a ship travels the world, it is important that they can be easily contacted, even when there is a language barrier.

Don’t worry!  A simple solution to this problem has already been found.  Each vessel is assigned a “call sign” by the country where it is registered.  Each ship is registered as a radio station.

Do you know the letters associated with your favorite radio stations?

In the United States, call signs are used for all Federal Communication Commission-licensed transmitters.  If a ship is taken out of service, its call sign may be reassigned.

The call sign for the TS Kennedy is K-V-M-U.

During a typical Sea Term, the TS Kennedy stops in four ports. While in port, the ship displays colorful signal flags that spell out our call sign.  Look to the far right of the photo below to see for yourself.  The K flag is half blue and half yellow.  The V flag is made up of a white field with two red intersecting lines resembling an X.  The M flag features two white intersecting lines that resemble an X on a blue field.  Finally, the U flag is divided into four squares, two white and two red. 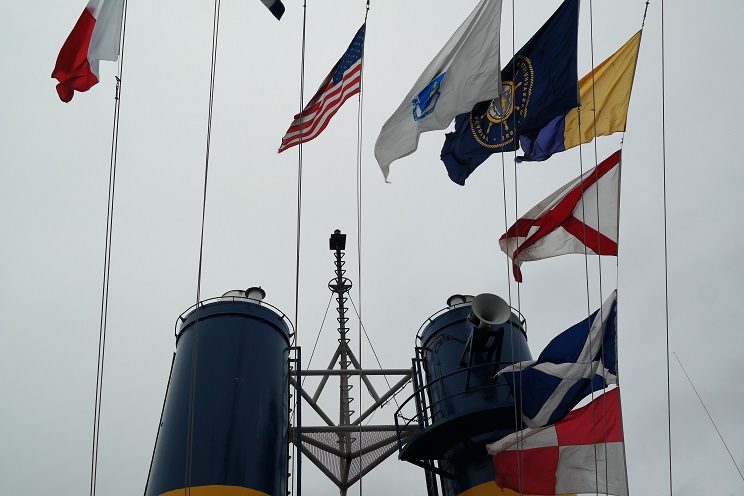 In the photo below, only the flags K-L-M are visible. 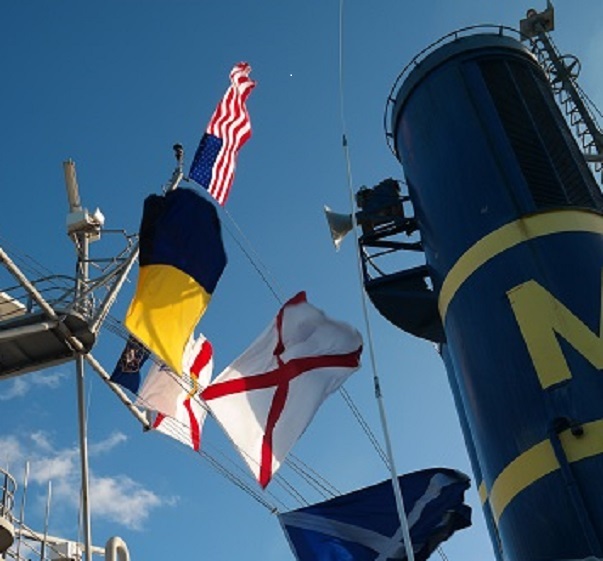 I just love seeing the flags flapping proudly in the breeze, visibly announcing our call sign.  Back on campus, the flags are displayed for special events.

Here are the call signs of two of my favorite historic passenger ships.

The call sign for the RMS Titanic was M-G-Y.

The call sign for the RMS Queen Mary was G-B-T-T.

Are you wondering how the TS Kennedy keeps track of all of these flags?  They are stored on the Bridge in little cubbies.  That's also where they keep flags from all of the countries that the ship has visited or will visit. 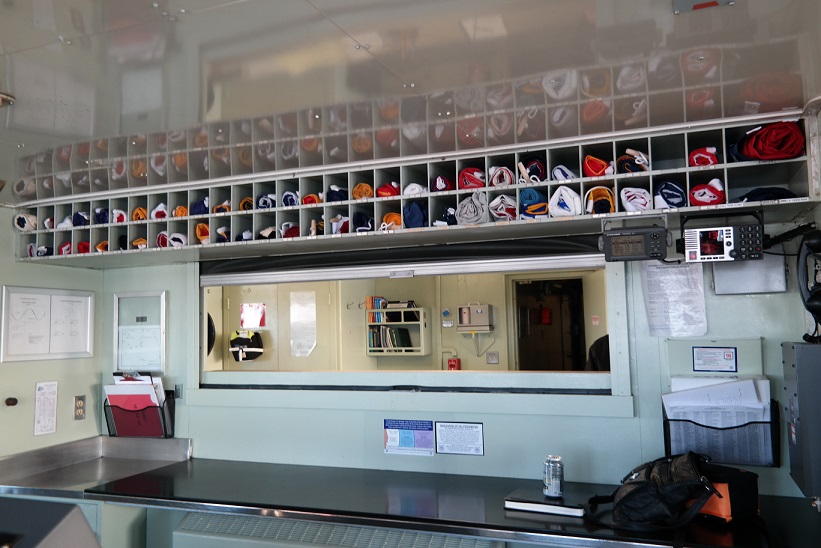 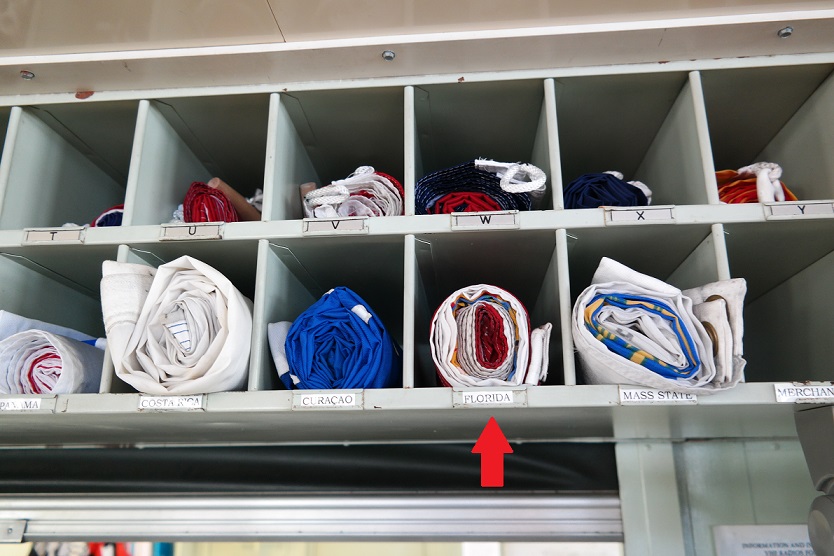 In the above photo, the red arrow is pointing to the cubby holding flag of Florida.   The TS Kennedy will fly that flag when the ship is docked in Fort Lauderdale.

Here is the signal flag alphabet. 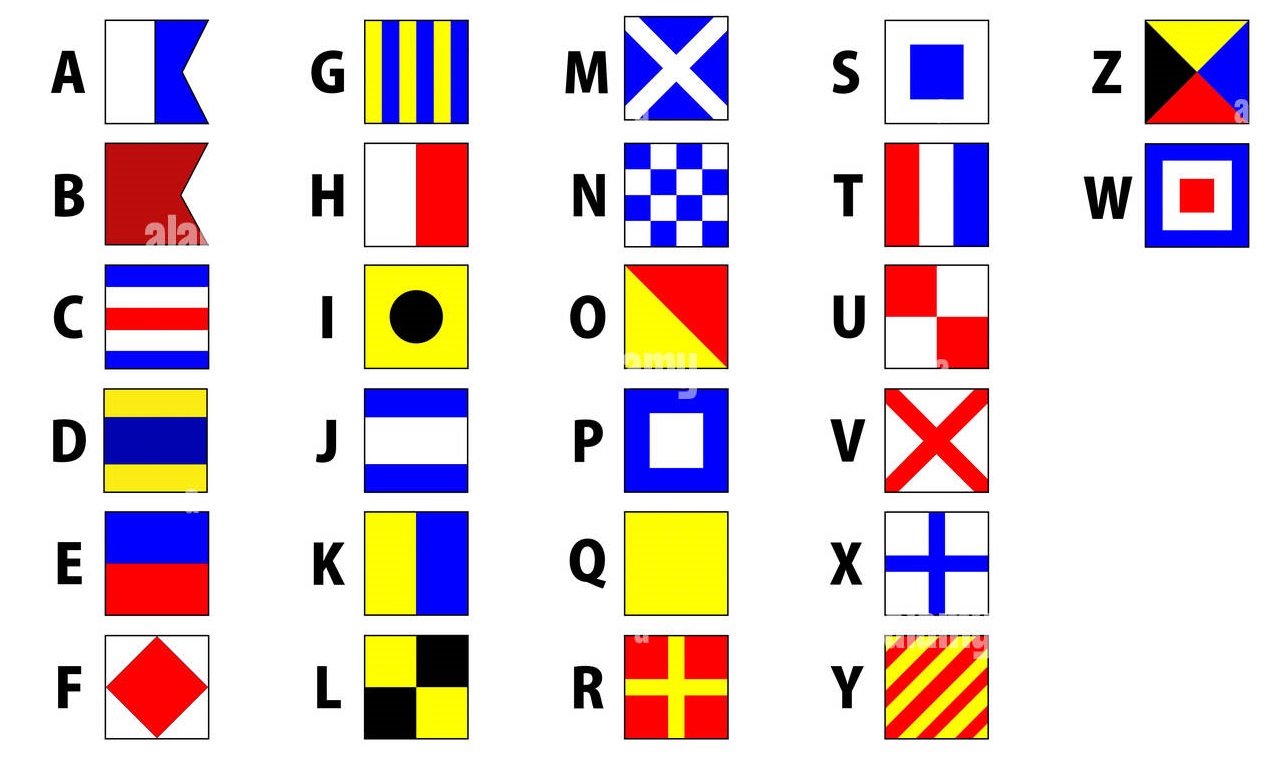 The ocean is full of ships heading in every direction.  I am glad to know that there is an easy, organized way to distinguish these ships at sea and communicate with them without confusion.

Perhaps our K-V-M-U flags will inspire you to spell your name, your initials, or your school’s name in signal flags.  If you do, please ask your teacher or parent to email a photo of the finished product.  My email address is ftvsubmissions@maritime.edu.

Wishing you a great day at school!

Your favorite friend aboard the K-V-M-U,