Do you get excited, nervous, and a little impatient a few days before a family vacation or the first day of school?  That’s how many of the cadets and crew members are feeling today.  Sunday morning, at approximately 10:30, the TS Kennedy will depart for Sea Term 2023.  Although there hasn’t been snow or ice in Buzzards Bay, everyone aboard the ship is ready to leave the rain, fog, and raw weather behind.

I have been asked why I chose 10:30 for the departure time, rather than leaving first thing in the morning.  It’s true that many people who are traveling on a long car trip prefer to leave as early as possible.  It is actually the tide in the Cape Cod Canal that dictates when the TS Kennedy departs, not the Captain’s personal preference.

Cadets who do not have watch on Sunday may have on campus liberty from 0600 to 0730.  They will have an opportunity to get off the ship one last time to say goodbye to family and friends who are able to come to campus.  Chartwells will be serving light refreshments in the Mess Deck.  At 0800, cadets will muster on the ship’s deck.  A rollcall will be taken to make sure that everyone is accounted for.  Cadets will gather on deck, waving and shouting to loved ones below. People who gather on the dock to bid farewell to the ship often bring along elaborate signs.  The atmosphere is always festive.  The TS Kennedy does not pass through the Cape Cod Canal when we depart.  Instead, we will head out through Buzzards Bay, bound for Puerto Rico.

Here aboard the TS Kennedy, the cadets have been securing the ship for Sunday morning’s departure.  Everything must be tied down – from the equipment on deck to personal items in the holds.  Wind and waves cause loose items to fly.  This could result in damage or injury.  Look around your classroom.  Do you see items that would fall if your classroom was actually a rocking ship?  What would you have to move or change in order to make your classroom secure?

I am very proud of how our cadets and crew performed during our Fire & Boat Drills.  On our second and third practices, we reduced the time needed to account for all of the cadets and crew members on board.  By the time you are reading this blog, we will have completed our actual drill in front of the U.S. Coast Guard.  I am confident that they will be impressed with what they see and determine the ship ready to depart for Sea Term 2023.

Since I do not write a Captain’s Log on weekends, my next update will be on Monday morning.  Thank you for sharing our first week aboard the TS Kennedy.

We have a policy off not mentioning students by name when we post drawings or work samples shared by teachers participating in the Follow The Voyage-Share The Experience Program.  When the creator of a drawing of the TS Kennedy shares the same last name as the Captain, however, we have to make an exception.

The masterpiece below was submitted by the proud teacher of Wren Campbell, a fifth grade student at Squantum Elementary School in Quincy, Massachusetts. At first, Little Buc wanted to keep the drawing for himself, but when he saw Wren's last name, he understood why it needed to be posted with the Captain's Log. 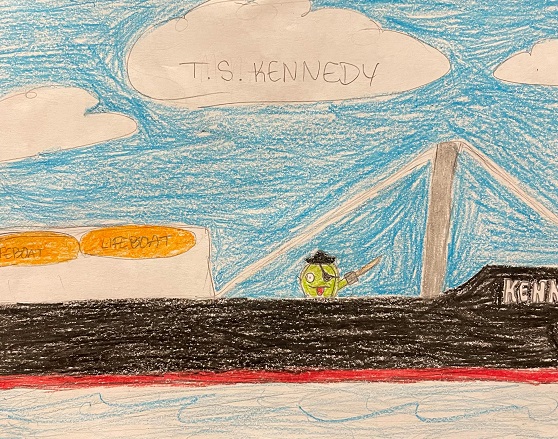 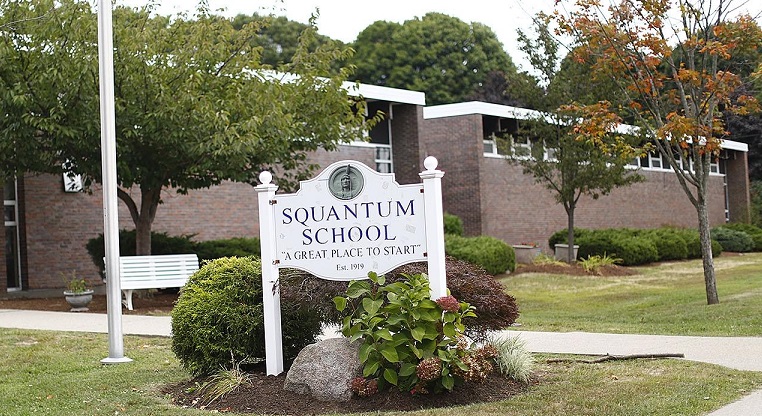